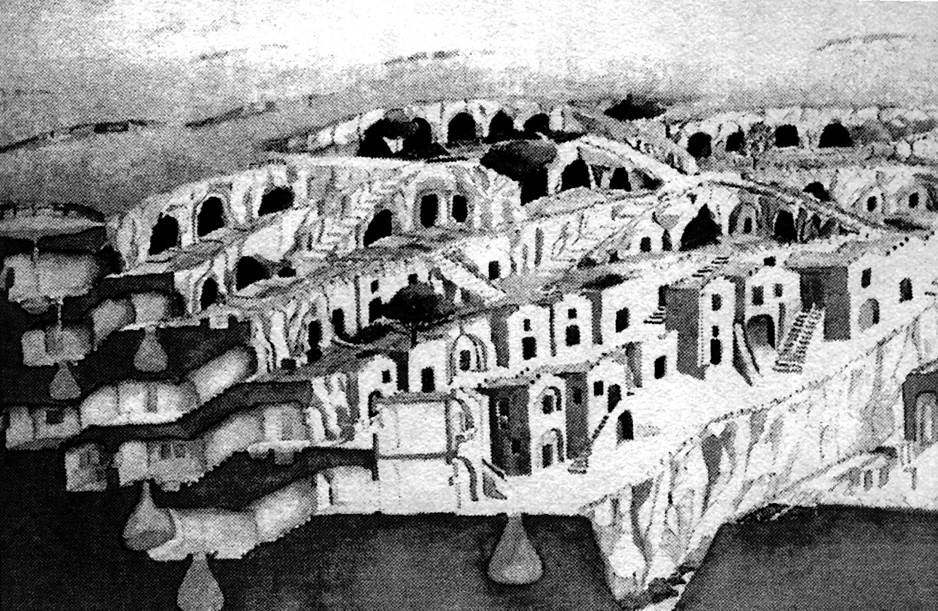 Matera is famous for its exceptional historical center, in particular for its most characteristic quarters, the Sasso “Caveoso” and the Sasso “Barisano”, which together with the “Civita” district form a complex urban nucleus, today referred to as the Sassi di Matera, from 1993 included by UNESCO on the list of World Heritage Sites. “Sasso” means a district carved into the rock, and the Sassi of Matera are literally sculpted close to a deep ravine, la Gravina.

The rock of the promontory where the Sassi were developed consists mainly of calcarenite, locally called tuff, a sedimentary rock of marine origin, which is tender and easily to shape and to excavate. This allowed the formation of numerous natural caves, facilitating the ingenious work of man with the excavation and retrieval of construction material, and allowing them to dig bigger space in the house, canals and cisterns, the so-called negative architecture.

The natural caves, numerous in the territory of Matera, were the first mansions for men, who did not passively pass the forms of nature but appropriated them, determining routes and architectures in the cave by digging and shaping.

A laborious excavation work began many centuries ago, and part of the resulting material was also used to close the entrance to the cave, dabbing it.

In addition to the excavation the cave was also enlarged with a type of construction, called “lamione”, which extended the cave to the outside. The main part of the houses of the Sassi seems to be very small from the outside, until you don’t open the door and realize that there’s an underground part that can be a small simple cave or, even 5 or 6 floors excavated.

Frequently, walking in the Sassi, you come across the chimneys that appear in the street because, without realizing it, we are actually walking on the roof of a house.

The tangle of tunnels is inextricable, and it is unimaginable the underground development of the city, which we tried to make with a section of a small area of ​​the Sassi, but actually it is difficult to render graphics, and can only give a vague idea, which will serve you to understand how what is normally seen by the Sassi is only the external film.

The orography of the territory and the nature of the rock have favored the human settlement since prehistoric times, and today we tend to place the first population of the area in the Neotlithic age.

“Matera is the only place in the world where the inhabitants can say they live in the same houses of their ancestors of 9,000 years ago” recites Fodor’s, an English guide.

Matera, in fact, is considered one of the oldest cities in the world, as well as the oldest where there has been continuity of life.