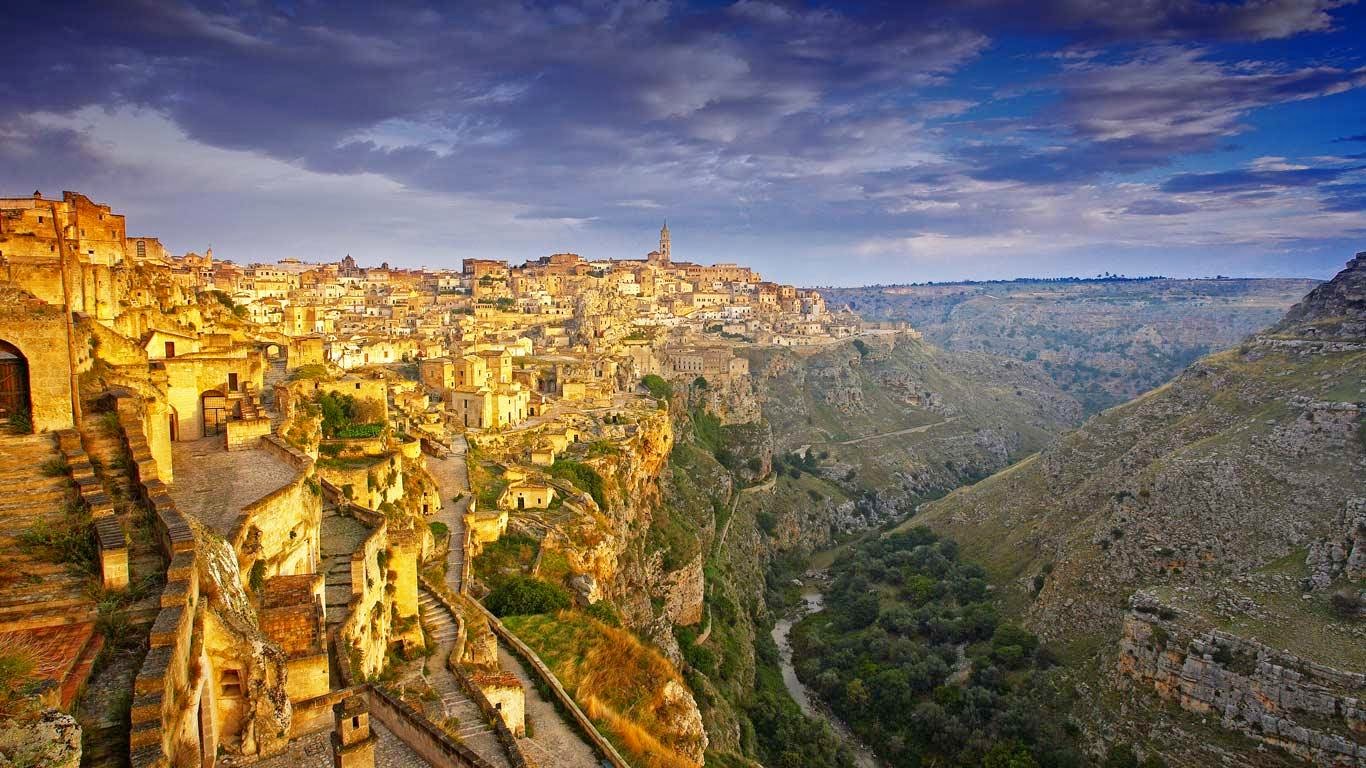 Before reading our suggested itinerary we advise you to have a look at this: What does it mean “SASSI”?

From our hotel we recommend you to start right away with the church of San Pietro BARISANO, the biggest rocky church of the Sassi, as well as the only one with a frontdoor and a bell tower (added in the XVIII century, when the Palace of the Abbots was built together with).

At the end of our little square there is also CASA CAVA, a former quarry where tuff bricks were extracted, today restored to Auditorium.

After Casa Cava turn on the right and always keep going upstairs and you will get to the so-called “Città al piano”, which is the center of Matera not belonging to the Sassi: we advise you to have a look at the Church of  SAN GIOVANNI BATTISTA, the oldest church in the “Città al piano” dating back to the XIV century (free entrance).

After a few meters you will get to Piazza Vittorio Veneto, the main town square where you can admire a beautiful view of the Sasso Barisano and the Cathedral from the three arches, and you can look out on the Hypogeum:  one Hypogeum is the PALOMBARO LUNGO, the biggest cistern dug in Europe, where there is the possibility to visit it with a guided tour of 30 minutes (3€) where you’ll ge to know everything about the system of collecting the rainy water (main reason why the Sassi of Matera have been chosen by UNESCO as World Heritage). You could also visit the other Hypogeum, behind the square, with a tour that lasts one hour, the so called Matera Sotterranea.

Follow Via delle Beccherie until Piazza Duomo, where you can go inside the Cathedral (free entrance), and admire the beautiful view of another part of the Sasso Barisano.

From Piazza Duomo, cross Piazza del Sedile, go to the baroque church of San Francesco di Assisi and to the Baroque Church of the Purgatory,  unusual church for its frontdoor decorations representing skeletons, skulls and people in flames (in the Purgatory).

Keep walking along Via Ridola, reach Piazzetta Pascoli and from there enjoy the view of the Sasso Caveoso and of the Gravina. Go to Via Bruno Buozzi to immerse yourself in the Sasso Caveoso, where you can admire the beautiful Rock Church of Madonna dell’Idris. Go towards the church of San Pietro Caveoso and pass under the arch on the right: here you’ll see Casa Grotta (a typical house in cave of a poor family before the evacuation of the Sassi in the 1950s when this area was called the Shame of Italy because of the bad conditions of living in caves without electricity, sewer and running water). Keep going on the street along the canyon and you’ll see the Rock Church of Santa Lucia alle Malve and at the end the historical area of an early medieval cemetery.

Go back to Piazza San Pietro Caveoso and continue on the panoramic road on the ravine Gravina, via Madonna delle Virtù, and then turn right to go up to Via D’Addozio that will lead you back to our hotel.

Start your day visiting the rocky churches of Madonna delle Virtù and San Nicola dei Greci, two frescoed cave wondered, one over the other, a monastery and old houses with tanks and troughs (in this period there is a contemporary art exhibition about the sculptures of Salvador Dalì).

We recommend  you to spend the rest of the day visiting  the Archaeological Park of the Rocky Churches(Parco Archeologico delle Chiese Rupestri), reachable by car in 15 minutes.

The Archaeological Park of the Rocky Churches is a UNESCO World Heritage site since 1993 and it is a unique place in the world where architecture and nature mingle until they merge. Here you can revive ten centuries of spirituality in over 150 rock churches, and you can also admire the most beautiful panorama of the Sassi of Matera, the river, the deep ravine Gravina and the movie location where Mel Gibson filmed the Crucifixion of Jesus in the film “The Passion of Christ” .

In the afternoon, we recommend you not to miss the beautiful and mystical Crypt of the Original Sin (Cripta del Peccato Originale) known as the Sistine Chapel of the rocky art, dating to the VIII-XIX centuries. The crypt was the place of worship of a rural settlement from the Middle Age which included a small monastic community. The church is adorned with splendid frescos, of a high aesthetic and theological value. It’s reachable by car or by private transfer that we can arrange for you.

The third day we recommend you to deepen the reality of the Sassi and the history of the nearby area by visiting the Museums of the City such as: